Art and Spirituality in the Mountains

At l'Alpe d'Huez, village and skiing resort in the Isere (South eastern France), we are lucky enough to have a particularly beautiful church : its architecture, stained glass windows and organ are great works of art. Come to see them! The church is open every day. The museum of Huez and Oisans also organises visits during the winter every Wednesday at 14:30 and during the summer every Tuesday at 17:30 (rendez-vous on the church square).

The idea of replacing the old wooden church by a new bigger one came during the run-up to the 1968 Winter Olympic Games (Which took place in this region). The new church was built facing the Meije Mountain. It was the parish Priest, of Dutch origin, Jaap Reuten (ministry from 1964 to 1992) who was the driving force behind the project and the church of Notre-Dame des Neiges was completed in 1970. The building of the church was funded by the generosity of the congregation as well as many benefactors. Three charitable associations were created, as from 1967, for the construction of the building, the stained glass windows and for the purchase of a church organ. The associations merged in 2004. St Nicolas' Crypt was inaugurated and consecrated on 30th December 1968, followed by the Church on 6th December 1969. The roof was completed in 1970 and the thirteenth, and last stained glass window was fitted in 2002. The church was built using the simplest materials (concrete, for the structural supports, copper for the roof, wood for the joists, and clear glass for the dome). The roofing was done by Charles Verguet.

The project was first thought of when Jean Le Boucher vowed to build a new church in honour of Mary during fighting on the slopes of the Alpette mountain (14th August, 1944). A certain number of symbolic elements have been highlighted by the resolutely modern architecture of Jean Marol.

The first symbolic element is that of God having put up his tent at the Alpe d'Huez, as Abraham did in the desert; the roof follows the rounded form of this vast refuge. Entrance to the building is made by the choir stalls; the long aisle and narthex are unlit, allowing a contemplative darkness. The centre of the church is a well of light. The shaft of this well is also the pole that holds the tent-like structure of the building up. The congregation is sat around the well of light, as if around a camp fire. The central pole is exactly aligned with the two other church towers of the town, indicating that religion, by its very nature, provides an essential link between people. The crypt is just below the well of light. 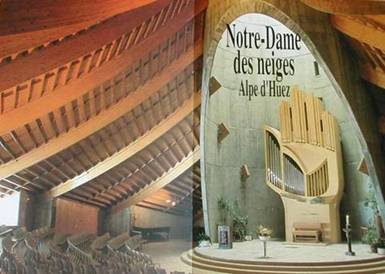 The church posseses an unique organ, baptised Christophe-Raphaël , built in 1978 by the organ constructer, Detlef Kleuker according to the indications of Jean Guillou, the composer and organ player of the Church of Saint-Eustache of Paris.

The organ, designed by Jean Marol, which is placed in the middle of the well of light, represents a hand held up towards the sky. The set of 24 organ pipes are encased in the fingers. The keyboard is situated facing the congregation; this allows spectators to watch the organist playing.

Concerts, organised by the charitable association Notre-Dame des Neiges-Orgues et montagnes (www.orguesetmontagnes.com) take place every Thursday evening during the summer and winter seasons. As well as recitals by some of the world's leading organists, the des Neiges also receives several orchestras each year.

Beautiful book and film about the church for sale in the church.

Thanks to Alexander Watson for the translation !